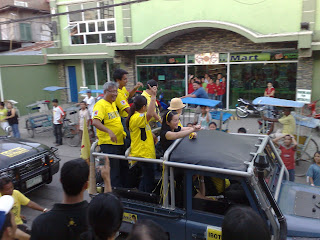 April 10, 2010 was an ordinary day to most Palomponganon, but for those who know the ever extrovert Kris Aquino, who is married to PBA basketball superstar James Yap and an equally famous cute son named after his father. Baby James Jr., who blurted out on TV the name of Villar who is considered the No. 1 opponent of his uncle Noynoy Aquino as per various surveys made by prominent survey companies in the past few months haven’t changed. 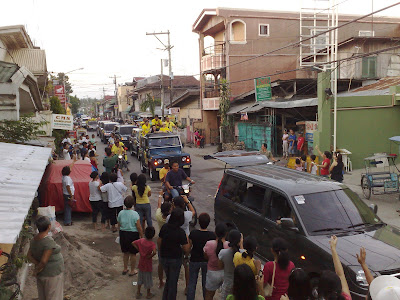 Part of the crowd waiting for Kris to pass by. From the background can be heard the rooting and shouting admirers of Kris, who is always seen during Sundays at the ABS-CBN TV afternoon program “The Buzz” hosted by Boy Abunda, Kris Aquino and Ruffa Gutierrez. Kris by the way is not the candidate, but only subbing for his brother Noynoy when he is not around during campaign sorties in the province. 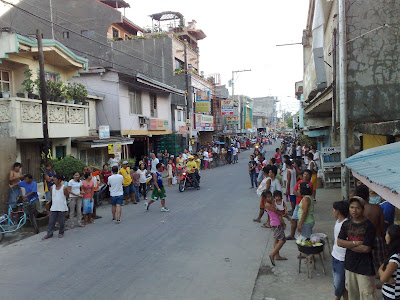 It can be noticed that the crowd that waited and joined the rally of the former mayor Ramon Onate is very small, even with the presence of actor Richard Gomez, his wife Lucy Torres Gomez  and of course Kris Aquino-Yap. If the presence of people will determine the number of voters and votes during the election, then
it is already an assurance of a win for the team of Mayor Eulogio Tupa where the number of rooters and admirers far outnumber those of Team Onate. 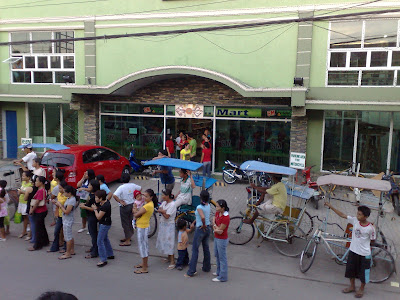 Picture above shows the employees of SM shopping mall who stopped tending their duties at the said mall just to get a glimpse of Kris Aquino’s first visit to Palompon, Leyte. Even the owner himself Manuel E. Yap is shown trying to have a vantage view of what’s going on.
View on gregmelep.blogspot.com