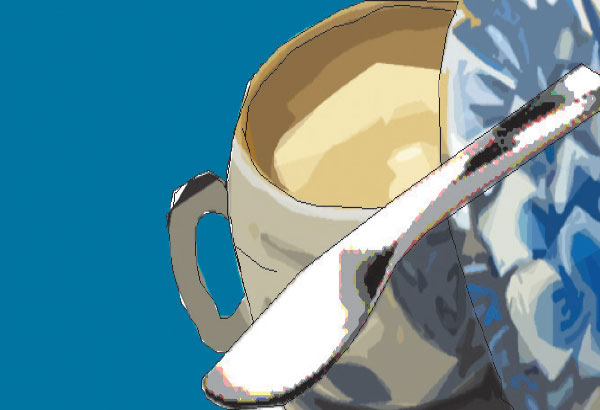 This week, it was a lot about bread and butter. And oh, quite a few burgers.

Juliana woke me up gently but insistently one morning, urging me to join her and eat what she proclaimed was “the best butter ever.” Together, and while I was still sleeping, she and her Daddy had apparently made the kitchen their playground once again. The day’s ingredient was butter, the whole beautiful block melted first, and then mixed with mushed slivers of gently roasted garlic. The fragrant pool of light gold liquid was then poured into a little round ceramic pot with ears and a lid, something that we’ve always had in the cupboard, but one I never quite knew what to use for (well, now I do). The whole thing went into the ref, to firm up and be perfect and special the way it was meant to be.

There is nothing fancy or complicated about it, and the simple addition of garlic makes the butter taste premium. It’s that kind of deceptively light snack that you think of and crave at odd hours — right after lunch, or just before dinner, or way past midnight. It’s what you will want to eat when you should not be eating yet or anymore, an irresistible go-to that never fails. While most would probably spread it on freshly toasted bread, we like to slather it thickly on slices of soft bread which we then toast until it is just the right mix of crisp and mush. In the oven toaster or the air fryer, all within the magic of one and a half minutes or so, the butter seeps a little past the surface all the way to just the middle. The heat stops it from going all the way through and instead perfectly warms and browns the bottom part just so. Oh, yeah. It is good. Best eaten immediately, preferably in the company of a funny 13-year-old musing on the meaning of her days and dreams. I wish I had a pen so that I could write down her thoughts, hilarious and insightful as they are.

Speaking of, Juliana brought home a friend who I have never ever seen eat much through the years we’ve known her, but she liked our bread and butter, too (and probably as much as we do!). It’s nearing the bottom of the pot now and both husband and daughter cannot wait to make some more. This same butter, the husband has used to garnish freshly cooked homemade burgers. I have never been a fan of burgers, come to think of it; I am not fond of ground meat. But of late, after watching a feature on the Food Network, I find myself thinking a lot about them. The image of the burger from Lusso seduced me — I remembered seeing a photo of it in a magazine feature — and so we headed there one sunny afternoon, slipping and settling into that cushy, lovely golden space that makes me feel I am inside a jewelry box. We start off with truffle fries, some classic mac ‘n’ cheese, and then the burger with the foie gras. It is delicious and juicy and everything that the burger in my mind should be. It was perfect, just what I was looking for. Lusso, like Cibo, never disappoints — after all, Gaita Fores can do no wrong. The food tastes good, the place feels good, and I relish in the Downton Abbey feel of nice, heavy tableware and impeccable service. Like a ritual, I never leave Lusso without indulging in ice cream with salt and olive oil, as served in a heavy silver cup and a nice silver spoon. Decadent. The burger, and the ice cream right after, is like that crazy kind of kiss that gets you to close your eyes in delight.

Days after, still on the hunt, I tried the burger at The Peninsula (it was a choice between that or the beautiful chicharon bulaklak I initially wanted to order). The burger came, looking mighty and proud — quite smug, actually — as though it were sure I would like it. I did, and I am happy because my lucky streak continues, and I do not think I am ready to meet a burger I will not like. Thirty-plus years of existence, not once do I remember ever wanting a burger, and now, all of a sudden, it is top of mind. What changed? I know the trigger was that one TV show I watched while I was still half asleep.

Meanwhile, there are other things that I want to be reacquainted with, like cold full cream milk so rich and thick it is almost a milkshake (I can achieve this with powdered milk mixed with just enough water and this will be just lovely poured over any ice cream flavor!), gorgeous grilled cheese sandwiches the way Gretchen makes them in her kitchen (if I remember correctly they are grilled unapologetically in butter), bacon cooked just until they are floppy and almost to the point of being crisp, its drippings poured over cold rice, and mango float! I miss mango float! It reminds me of the many summers during my college days.

Butter and burgers. I am thankful for their presence in my meals the whole week. It did make facing the stresses of those very busy workdays less imposing, and far less urgent.